Speedy Trial Waivers or What Becomes of a Constitutional Right? 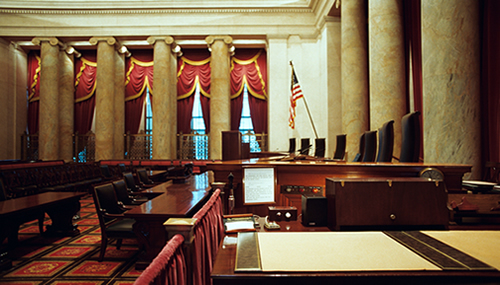 30 Jun Speedy Trial Waivers or What Becomes of a Constitutional Right?

You’re finishing up a preliminary conference in your criminal case. Your defense counsel turns to you and makes a quick comment. “Fred, I hope you don’t mind, but we have a little bit of housekeeping.” No big deal, you think. But, as you’re about to say something about your lawyer’s bill, she interjects. “The Judge would like you to sign this Speedy Trial Waiver. It’s no big deal. But you will need to sign this since we won’t be back in court for another three months.”

It’s at this point that you vaguely remember hearing something in high school about the right to a speedy trial. So, you bring it up with your lawyer, and she replies. “Come on, Fred. This is no big deal. It’s just helping the Judge keep his calendar straight. Besides, if you don’t sign it, then the Judge is going to be really angry with you.”

Keeping in mind that the Judge determines what evidence to admit against you at trial and may also decide if and for how long you go to prison for if the jury finds you guilty, you take your lawyer’s pen and sign the form. What’s the harm, right? Your lawyer just told you it was no big deal. Well, you just signed away a right granted to you under the Sixth Amendment of the Constitution. And you did it without your lawyer even raising an eyebrow, let alone an objection.

The Right to a Speedy Trial

The Sixth Amendment to the U.S. Constitution states, in part, that “[i]n all criminal prosecutions, the accused shall enjoy the right to a speedy and public trial….” The Constitution does not define the phrase “speedy trial” at all. But the point is to make sure that defendants don’t languish in jail awaiting trial for long periods of time.

Back before the ratification of the Bill of Rights, the government could arrest and detain the accused for as long as the court would allow. This is why the drafters included this phrase in the Sixth Amendment.

The Supreme Court held that the right to a speedy trial was flexible, so Congress intervened.

Following Gideon, the Supreme Court heard a series of cases concerning the Constitutional Right to a Speedy Trial. This culminated in one of the leading cases on the matter, Barker v. Wingo. The Supreme Court found that it is not an “inflexible rule,” meaning that its application depends on several circumstances. These include the length of the delay in a trial, the reason that the prosecution gives for the delay, the defendant’s assertion of the right to a speedy trial, and whether the delay caused any prejudice to the accused.

As a result of these cases, Congress passed the Speedy Trial Act of 1974. This requires prosecutors to file an information or indictment within 30 days of arrest or service of a summons. And then a trial must follow 70 days afterward.

To prevent defendants from being rushed into a trial without adequate preparation, lawmakers amended the Speedy Trial Act in 1979. The amendment provided that a trial cannot begin less than 30 days after an indictment has been filed. So, once you receive an indictment, the earliest your trial can begin would be 31 days afterward with an outside date of commencement no later than 70 days after the indictment. However, in practice, this is rarely the case.

The Current State of Speedy Trials and Waivers

The law specifically says your trial should start no later than 70 days after your indictment. Yet the reality is that you may wait months or even years before the day for jury selection (often the first step in a trial) begins. This is because a violation of the speedy trial clause of the Sixth Amendment requires the trial court to dismiss the case in its entirety, a rather extreme measure. So, the courts tend to be lenient in enforcing motions to dismiss for this ground. This is also why courts ask for defendants to sign a Speedy Trial Waiver. (Well, the word “ask” might be a misconception, since most defendants are actually pressured into waiving this Sixth Amendment right.)

The typical Speedy Trial Waiver is a one-, two- or three-page document, depending on the jurisdiction. Each court usually has its own form. For example, the Eastern District of New York uses a three-page document that first lists the specific delay code under 18 U.S.C. § 3161, with the most common one checked off being “Other: In the Interests of Justice.”

This is then followed by the actual waiver statement: “The Defendant has been fully advised by counsel of his/her rights guaranteed under the Sixth Amendment to the United States Constitution; the Speedy Trial Act of 1974, 18 U.S.C. §§ 3161-74; the Plan and Rules of this Court adopted pursuant to that Act; and Rule 50(b) of the Federal Rules of Criminal Procedure. The Defendant understands that he/she has a right to be tried before a jury within a specified time period, not counting excludable periods.”

With the simple strike of a pen, someone can waive their right to a speedy trial without even knowing it.

After this statement are spaces for the date and signature of the U.S. District Judge assigned to the case, the defendant, the defense attorney and the Assistant U.S. Attorney. With the simple stroke of a pen, the defendant has waived the Speedy Trial clause of the Sixth Amendment and agreed that any period from the date of the waiver until the next court appearance will not count towards the 70 days required by the Speedy Trial Act.

Courts have in the past held that a defendant cannot unilaterally waive his or her rights under the Sixth Amendment. For example, the Tenth Circuit ruled in United States v. Saltzman that a trial judge must determine that it serves the “ends of justice” to grant the waiver signed by the defendant, which the government then confirms. However, it is usually the trial judge who fills out the form and then requests signatures from the defendant, defense counsel and the prosecutor. So rather than the defendant initiating the process, it is usual the trial judge who insists on the Waiver.

While the focus on motions for dismissal violated on Speedy Trial clause is on trial prejudice, meaning that a defendant’s ability to mount a defense were compromised by delay, Speedy Trial Waivers have a real life impact that cannot be understated. When many folks face an indictment or arrest, they face a loss of employment, especially if they work in sensitive industries like teaching, law enforcement, brokerage, banking and healthcare.

This is especially the case if the crime charged directly relates to their professional work. In addition, prosecutors require that those charged with a felony surrender their passports, restricting foreign travel, and often put in pre-trial restrictions limiting the ability of the accused to travel outside of the state or jurisdiction where their case is pending. Finally, an indictment can lead to temporary disqualification from TSA PreCheck, making permitted air travel difficult. All of these can cause a hardship for someone accused of a crime. The Speedy Trial Waiver only exacerbates this by stretching out the time a person has to spend in limbo awaiting trial.

These real-world problems are even worse if the defendant is denied bail or subject to pretrial detention for other reasons. The loss of freedom for long periods of time awaiting trial should be viewed as an affront to justice, a clear reason why the Framers inserted the Speedy Trial Clause in the Sixth Amendment. However, even those in custody must sign the Speedy Trial Waivers while their cases slowly progress toward trial.

It is clear that courts nationwide have been abusing the Speedy Trial Waiver. Defendants have seen their lives put on hold while they either languish in pretrial detention centers or sit at home awaiting trials that may be months or years in the future. During this time, they are incurring significant legal and other expenses, while seeing their livelihoods ruined and destroyed.

The American Bar Association has proposed a number of Criminal Justice Standards, including ones for dealing with the Speedy Trial clause. As a threshold matter, the ABA makes clear that defendants in custody should face shorter time limits than those on pretrial release. This is important since those held in custody have already started serving time without a conviction, incurring greater harm in the process than those out on bail.

As a result, the ABA has proposed a presumptive speedy trial time limit of 90 days for those in custody and 180 days for those on pretrial release. These limits seem more realistic than the 70 days set forth in the Speedy Trial Act. But they still allow defense counsel sufficient time to prepare a defense.

Hopefully, if officials adopt these ABA proposals, then they may lead to the end of Speedy Trial Waivers. However, the ABA issued these proposals in 2004. And, so far, the federal government and most jurisdictions have yet to pass them. Until such time, defendants will still be coerced into signing away their Constitutional Rights through Speedy Trial Waivers.