Could Psilocybin Mushrooms Hold the Key to Reducing Recidivism Rates? 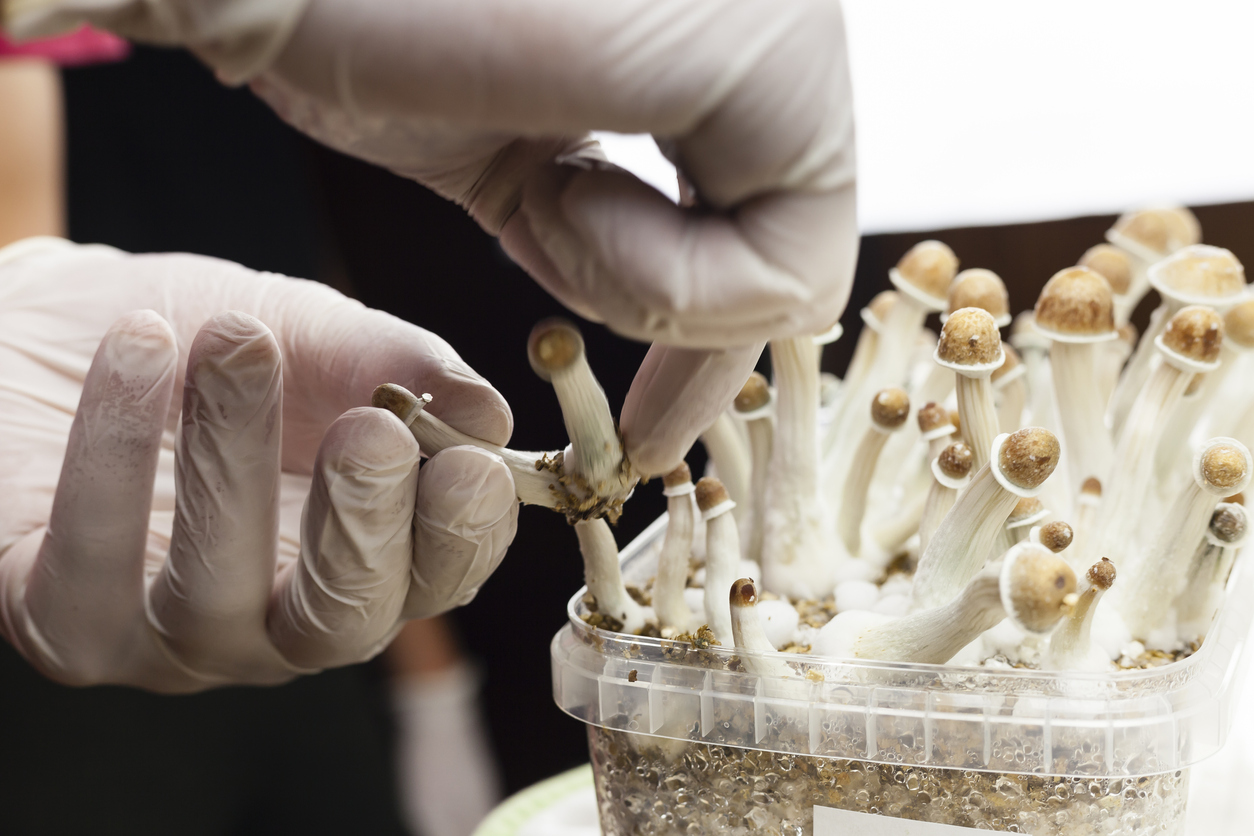 In the United States, recidivism rates—or the rate at which people return to prison after release—remain high. Within three years of release, two out of three justice-impacted people face another arrest. Further, over half of these people end up incarcerated. When looking to reduce those rates, some have proposed further studying psilocybin-assisted therapy and programs. Psilocybin, a psychedelic compound found in the mushroom Psilocybe cubensis, has been studied for its impact on criminality and recidivism. With positive feedback, each study encourages looking at psilocybin to lower recidivism and criminal behaviors.

Psilocybin is currently a Schedule I substance, but scientists say it has real medicinal value.

Under federal guidelines, psychedelics like psilocybin and lysergic acid diethylamide (LSD) are included in Schedule I of the Controlled Substances Act (CSA). This means that there are no currently accepted medical uses for them. It also means they have high potential for abuse. Further, it means they lack accepted safety for use under medical supervision. Yet, studies done by certain groups show that psychedelics have no addictive qualities.

Psilocybin is another psychedelic substance from fresh or dried psilocybin mushrooms. The substance is hallucinogenic. The mushrooms can be fresh, dried, or brewed into teas. Also, psilocybin can be synthetic if made into a powder form.

Psilocybin was legal in the United States until relatively recently.

Controversy surrounding drugs and their abuse began long before generally expected. For example, anti-opium laws targeted Chinese immigrants around the 1870’s. Such acts instigated movements that antagonized the use of certain substances on grounds other than medicinal purpose. Instead, laws such as anti-opium laws

Later, psychedelics followed a similar historical path as cannabis. President Richard Nixon spearheaded and the War on Drugs in the 1970’s. The Controlled Substances Act came to be in 1971 as result of Nixon’s efforts. The act was a way to regulate various substances. Psychedelics and cannabis both fell under Schedule I classification for CSA. Schedule I classification means there is no medicinal value and highly addictive qualities. This also meant that any studies on psychedelics and their potential had to stop.

Despite CSA guidelines, studies looked further into different potentials of psychedelics on users. These studies expand to justice-impacted individuals and recidivism rates as well. One of these studies occurred before the beginning of the War on Drugs. From 1961 to 1963, Timothy Leary and others at Harvard University conducted the Concord Prison Experiment. The experiment’s name comes from the Concord State Prison in Concord, Massachusetts. Their study examined the use of psilocybin and its impact on recidivism rates. They worked with 32 incarcerated persons and followed their progress after release.

At first, the study gave surprising results. In the experiment’s first follow-up, Leary reported a 32% recidivism rate. This was much less than the 56% recidivism rate of those not involved in the study. But, it was later revealed that those numbers were not entirely accurate. After an 18 to 26 month range, the recidivism rate was then reported to be 59%.

Even though the recidivism rate did not decrease, there was something Leary took away. According to Leary, only seven percent of those returning to prison did so because of a new criminal charge. The remaining 52% returned due to technical parole violations. From Leary’s perspective, no new criminal charges showed improvement. This element of Leary’s conclusion is supported today by high rates of recidivism due to technical parole violations.

A Followup on the Concord Prison Experiment: 34 Years Later

The report came to several conclusions about the original Concord Prison Experiment. First, the study found that Leary skewed the technical probation violation percentages. According to Doblin’s analysis, 39% of participants committed new criminal acts. About 28% of those people committed new crimes and 33% did not return to prison. Further, Doblin looked into the recidivism rates after two-and-a-half years. According to Doblin, 38% returned for a new crime. Another 33% returned for parole violations. Only 29% did not return.

Doblin emphasizes the possibility of using psilocybin-assisted psychological therapy for incarcerated individuals, mainly due to his findings on after release support. He argues that those involved in the experiment did not have sufficient support after their release. Doblin also argues that psilocybin is not “magic.” But, he says he believes they can help incarcerated individuals if they are paired with more support after release. He agrees with Leary’s idea of support after release could model the Alcoholics Anonymous framework. This framework would include a halfway house where individuals can discuss mutual problems. Regardless, Doblin said there should be more experiments connecting psilocybin and recidivism should.

In 2017, another study was conducted on the relationships between psilocybin and criminality. The study used data from 480,000 United States respondents to look at criminal behavior. The study found several correlative results about psilocybin and recidivism rates. First, the study found a decreased likelihood of larceny, theft and other property crimes among those who used psychedelics, whether psilocybin or others. The study also found a decreased likelihood of assault and other violent crimes. But, the study also examined places of methodological limitations of their experiment, like self-report biases. In its conclusion, however, the study recommended further experimentation and study of psilocybin and its effects on criminality.