Pride and the History of Police Violence Against LGBTQ Communities 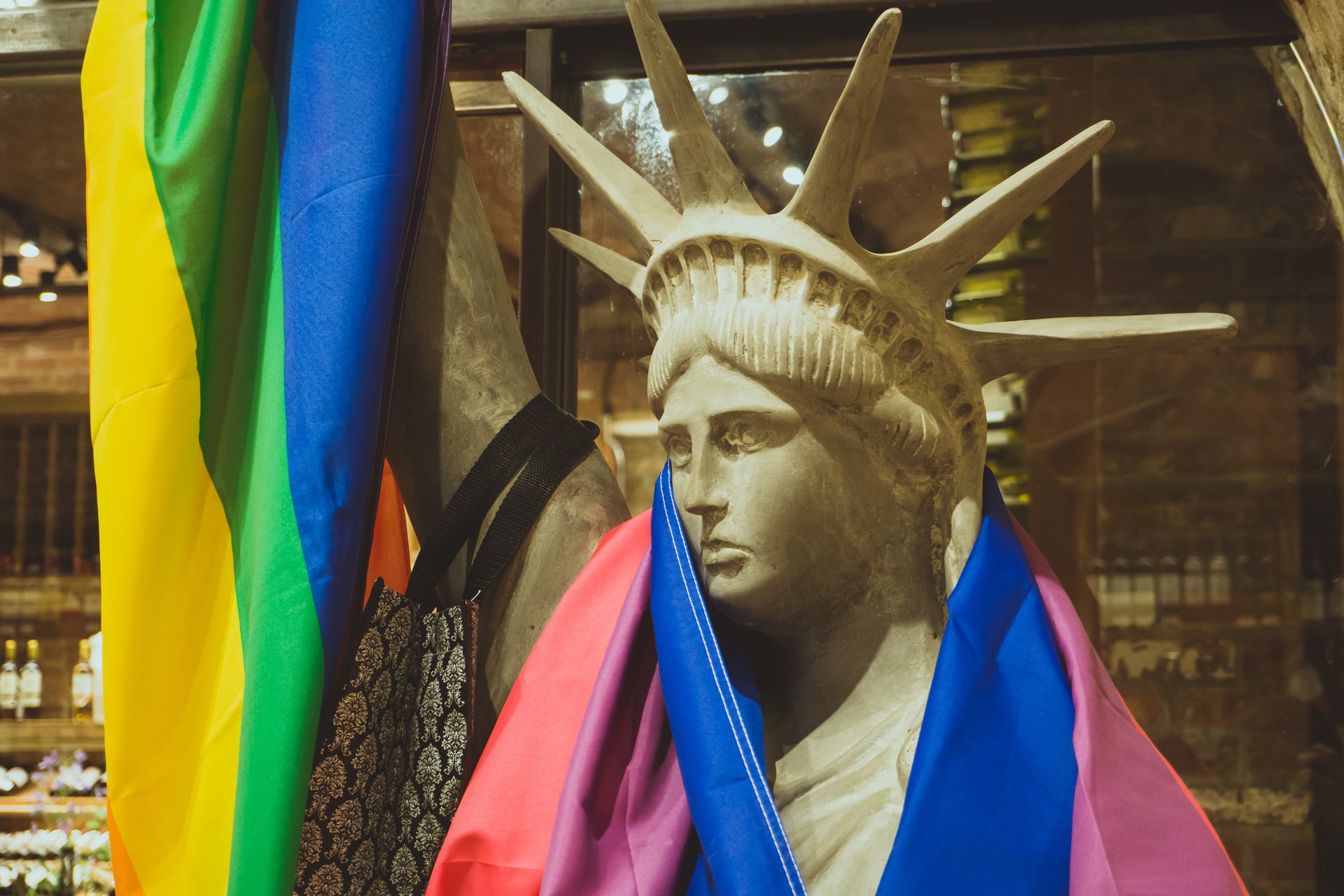 This year, the New York City Pride parade will not include police, either as participants or security. The decision sparked debate across news outlets and social media. Activists made comments about blind spots and the history of Pride as a reaction to police violence. Pride events trace back to the Stonewall Riots. But they are also a response to decades of targeted police violence against LGBTQ people. Now, some argue for more inclusivity; others believe that banning police from Pride reflects a larger, more urgent effort to reduce police presence in historically targeted communities.

The Stonewall Inn was a major instance of police violence against LGBTQ New Yorkers.

Stonewall Inn was a safe haven for LGBTQ people in New York during the late 1960s. The reality, though, is that police and policymakers targeted LGBTQ people for much of the decade. Author and activist Roxane Gay writes that “the LGBTQ community was reeling from McCarthyism and a pernicious atmosphere of persecution across the country.”

Gay further explains that homosexuality was still considered a mental illness throughout the 1960s and into the 1970s.

The police raid on Stonewall Inn was not unique, but it did spark riots that garnered national attention. At the time, many states outlawed homosexuality. Anti-discrimination laws also did not protect LGBTQ people. Stonewall Inn was well known and popular with LGBTQ New Yorkers, and raids were common. As one patron explains, the bar was initially exclusive to gay men. Eventually, the space welcomed women and eventually drag queens.*

Stonewall Inn managers usually had advance warnings of police raids. On the night of the riots, there was no such tip. When crowds outside the establishment observed police brutalizing the bar’s patrons, they responded by throwing bricks and bottles at the police. It was not the first time LGBTQ people resisted police violence. However, the Stonewall riots quickly grew into a powerful rebuke of anti-LGBTQ policing in New York.

Organizers agreed to move an annual event from Philadelphia to New York in response to the Stonewall riots.

Members of the LGBTQ community were already meeting in Philadelphia each year to renew arguments for legal protections against discrimination and anti-LGBTQ laws. Given the proximity to the Stonewall riots, organizers decided to move the meeting to New York City. They combined it with the inaugural Christopher Street Liberation Day march. This event became an annual celebration of LGBTQ resistance to police. This march eventually evolved into the Pride parade.

As Fred Sargent, a participant in the first Christopher Street Liberation Day march, notes, “The cops turned their backs on us to convey their disdain, but the masses of people kept carrying signs and banners, chanting and waving to surprised onlookers.” Sargent’s experience was that police officers resisted the earliest iterations of NYC Pride. They chose not to participate. Now, organizers are choosing to return to that history, banning police from participating through at least 2025.

Police violence and discrimination against LGBTQ people continues to this day.

Pride has its origins in an event that transpired more than 50 years ago. But community members continue to experience brutality and discrimination from police departments. According to David Correa, the interim executive director of NYC Pride, organizers “decided it was time to do more and better work … and we agreed that it was of utmost importance to put the most marginalized in our communities first.” The commitment to protecting the LGBTQ community drove their decision to remove all police presence from NYC Pride events.

It is important to understand that what David Correa and Roxane Gay allude to is a long history of well-documented harassment, violence, and discrimination. Police violence against LGTBQ is not a debate; it is historical fact. Lambda Legal has compiled a number of resources for LGBTQ people experiencing injustice. Their database includes state-based organizations formed specifically to help protect LGBTQ communities from discrimination.

The criminalization of LGBTQ people is not just a thing of the past, despite progressive efforts to end anti-LGBTQ discrimination. At last year’s NYC Pride event, for example, police officers attacked LGBTQ demonstrators with pepper spray and batons. But discrimination goes far beyond the clashes at marches and events.

LGBTQ people are three times more likely to experience incarceration; transgender people are twice as likely to go to jail or prison, and more than half report police misconduct during interactions with police. Transgender also face an increased risk of death at the hands of police and corrections staff. More than 20% of juveniles in correctional facilities are LGBTQ, despite being just 10% of the youth population in America.

Organizers banned police from this year’s Pride after many incidents of police violence over the last year.

“To tell young LGBTQ activists that they are being divisive for not wanting an institution that regularly abuses them at an event that was forged to protest that institution’s practices feels disrespectful to the history of Pride. Police cannot peacock as allies for one day a year and not expect to be held accountable for their actions the rest of the time,” Kitty Stryker argued in 2018. Three years later, the debate rages on about whether or not police should be welcome at Pride events.

Andre Thomas, the co-chair of Heritage of Pride, points out that the conversation is nothing new. He explains that as recently as last year, NYPD officers assaulted LGBTQ New Yorkers protesting the murder of George Floyd. Speaking as a representative for Heritage of Pride, Thomas also says that the decision to ban police at NYC Pride is a response to continued police violence against LGBTQ people across the country.

“There needs to be more education and a better understanding of what we’re up against. Talk to any person of color about their interaction with police, and they all say the same thing. And talk to anyone who stood in front of the Stonewall last year trying to get people to pay attention, and who ended up being victims of overzealous police. Frankly, if that overreach by police officers didn’t happen last year, we probably wouldn’t be having this conversation,” he suggests.

Some LGBTQ activists say that they want to include the police at Pride.

Ana Arboleda, vice president of the NYC Gay Officers Action League, believes that discriminating against LGBTQ police officers is especially problematic. Arboleda, a lesbian woman of color and member of the NYPD, takes the ban on police presence personally. Aside from the safety that officers provide, she argues, excluding LGBTQ officers goes against what NYC Pride is about.

“It bears repeating, we are all the same as LGBTQ individuals, and we are all fighting for the same causes. We are all minorities as gay, lesbian, trans and queer, we have all felt the horrible effects of being marginalized, and we want equal protection under the law. Why shouldn’t we all work together to achieve what we all want together? And virtually all of us are good, honest, hardworking law enforcement officers whose main goal is to protect our community and make it better since we are part of the community too,” she insists.

At the root of the disagreement lies a deeper rift. For those who oppose NYPD at Pride, the decision centers on the long history of police violence against LGBTQ people, and LGBTQ people of color especially. People like Andre Thomas say that they cannot ignore the intersectional identities represented at NYC Pride who feel unsafe around police officers. Arboleda and her peers, on the other hand, express that they want to see NYC Pride as a way to make LGBTQ officers more visible and address the stigma against police. With the event approaching quickly, there are no signs that organizers will reverse the ban this year.

*Editors note: As CNN explains, transgender people self-identified as drag queens and/or transvestites at the time, and they were mindful of laws prohibiting individuals from wearing more than three items at a time that could be construed as “cross-dress.”